POMONA, CA, April 19th, 2022 -- Worlds collide in Battletoads & Double Dragon in an officially-licensed limited collector’s cartridge re-release of the classic Nintendo® Entertainment System brawler from Retro-Bit® Publishing, a publishing imprint of Retro-Bit® that is distributed exclusively by Innex Inc®. This will only be available during an open pre-order window from April 19th through May 22nd, 2022, at a price of $59.99/€64.99.  Retro-Bit Publishing also intends to release the 16-bit version of the game later this year.

Developed by Rare and published by Tradewest in 1993, Battletoads & Double Dragon brought two of the 20th century's most iconic beat 'em up franchises together for an unforgettable adventure to save Earth from the evil Dark Queen and Shadow Boss. Whether solo or two-player co-op, the 8-bit cartridge allowed brawlers to choose between Jimmy and Billy Lee and the three Battletoads -- Zitz, Rash, and Pimple. Through seven lengthy and varied stages, players beat up aliens, raced on speed bikes, swung over bottomless pits, and even got into an epic shoot 'em up battle in the middle of space. And with familiar faces like Big Blag, Abobo, Robo-Manus and more, both critics and fans have embraced Battletoads & Double Dragon as the most exciting and diverse beat 'em up released. 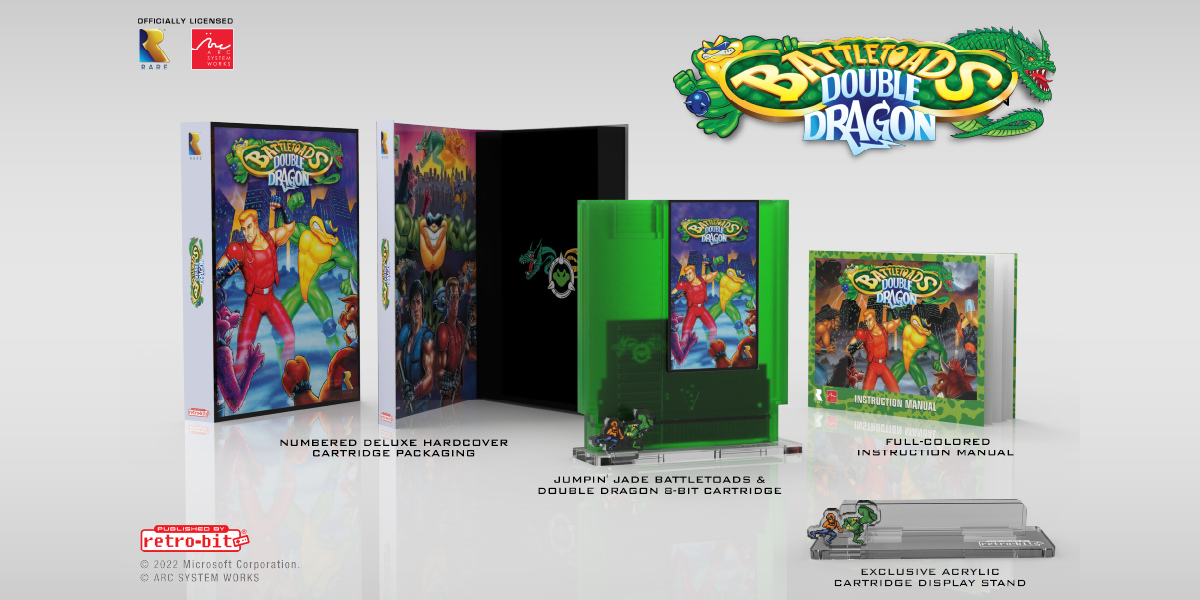 The upcoming Collector’s Edition from Retro-Bit® Publishing will bring this ultimate team-up into the 21st century with an individually-numbered deluxe hardcover box that is scaled to the dimensions of traditional 8-bit cartridge packaging for display continuity. It will also house a Jumpin' Jade cartridge for compatible 8-bit systems and include a full-color instruction manual.  Something Retro-Bit Publishing is introducing in this collector’s edition is an exclusive acrylic cartridge display stand featuring pixelated characters that represent both Battletoads and Double Dragon.


"A team-up as monumental as this deserves the highest-quality product, and that's what Retro-Bit Publishing strives for on every collector’s edition," explains Richard Igros, Director of Marketing. "We are always looking to innovate with each re-release while consistently keeping the essence of game preservation in mind. The acrylic stand will help collectors and fans display the game like never before. Battletoads & Double Dragon will also mark the first cross-license title we've worked on, and we are grateful to Rare and Arc System Works for this opportunity.  We feel that fans of both the Lee brothers and the 'Toads will appreciate the attention to detail we've given this incredible game."


Pre-orders will begin on April 19th and run through May 22nd, visit the Retro-Bit website for all participating retailers. North American pre-orders can be placed through Limited Run Games and Castlemania Games, while European pre-orders will be available in late April and can be found at Spel & Sant, DragonBox Shop, and Strictly Limited Games. Battletoads & Double Dragon pre-orders are $59.99 in North America and /€64.99 in Europe.


More information can be found at: https://retro-bit.com/btdd

Retro-Bit Publishing® strives to provide the re-releases of some of the rarest and unattainable classic titles to regions where they were never released. While closely partnering with licensors, Retro-Bit Publishing®brings these unique retro games to gamers today from around the world, and at a price worth collecting.  With attention to detail of every title, Retro-Bit Publishing® has brought numerous retro gaming fans the chance to own time-honored classics in their original form - offering gamers the chance to … Remember. Replay. Relive. Retro-Bit can be found online at retro-bit.com, Facebook (@Retrobitgaming) and Twitter (@RetroBitGaming).

UK-based developer Rare has been making golden memories and redefining gaming genres since 1985, and exclusively on Microsoft platforms since joining Microsoft Studios in 2002. Following an opportunity to celebrate 30 years of games with the Rare Replay anniversary collection in 2015 – covering everything from Battletoads to Banjo-Kazooie, Perfect Dark to Viva Piñata – the studio has been forging ahead with shared world adventures in Sea of Thieves since its 2018 launch.

Arc System Works America (ASW America), the North American branch of Arc System Works, is the premier publisher and developer of the widely popular Guilty Gear and BlazBlue franchises. Deep-rooted in the communities it builds, ASW America strives to bring unforgettable experiences to its passionate fanbase.

Innex Inc was founded in 2004 on the principles of innovation, fun, and a commitment to customer service.  Over a decade later and they continue to offer the Innex Experience of offering customers a wide variety of video-game related toys and peripherals at a competitive price. Innex is an award-winning leader in global distribution offering multiple services and shipping plans. They partner with the most recognizable and trusted brands and licenses in the industry. More information can be found online at innexinc.com.

Due to a policy of continuous product improvement, Retro-Bit reserves the right to change specifications and content without notice.