Yuko Ahso was just a normal high school student until everything changed.  An invading force of creatures from the Dark World attacked and the helpless Yuko became the Warrior of Valis thanks to the sword granted to her by Queen Valia.  Now gamers can once again play through the physical SEGA Genesis® / Mega Drive cartridges in this gorgeous collection that pays homage to the series.  The journey begins with Yuko learning how to use her abilities and becoming familiar with her spells to take on the evil Rogles.  Then take a trip through the follow-up in the "chibi" (aka "super deformed") outing of Syd of Valis to fight off the forces of the Emperor Megas that offers a unique weapon and armor matching custom system.  Then end it with Valis III, widely regarded as one of the best of the series.  Guide Yuko, Cham, and Valna to unlock the power of the Sword of Valis to stop the encroaching armies of Glames and save all the worlds!

When you pre-order all three titles as a set, you'll get a bit more than just each individual game!  A sleek master slipcover will keep your collection dust free and in one spot while the acrylic display with Yuko, Cham, and Valna will defend your new set from encroaching enemies. 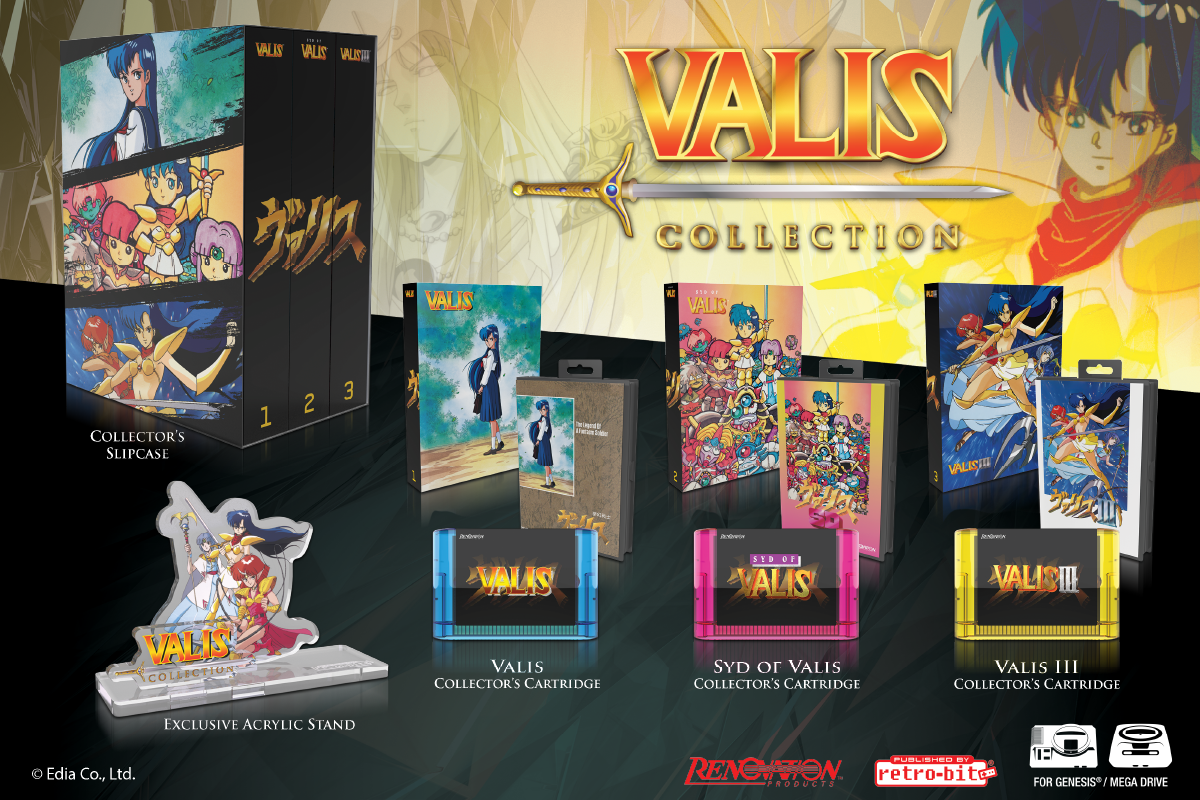 The saga of Yuko Ahso begins here!  Power up your blade and collect the Fantasm Jewels from each of the bosses to unlock new magical abilities as you take on new challenges, search for your friend Reiko, and bring down Rogles!

The whimsical and cute "chibi" style takes over this retelling of Valis II.  Don't think this is a walk in the park, though!  Fear not, Yuko will unlock a wardrobe of armor and weapons to stop Megas from taking over Earth and the Dreamworld.

Something is amiss in the Dreamworld and it is the Dark Lord Glames who wants to conquer all the worlds and save the disappearing Dark World.  Yuko will team up with Cham - a Dark World rebel - and her sorceress sister Valna in order to save everyone!

A portion of the proceeds generated by Retro-Bit's Valis Collection re-release will be donated to the Video Game History Foundation, a non-profit organization dedicated to preserving, celebrating, and teaching the history of video games.

“Valis fanatics and newcomers alike will dig on this game.  It presents a feast for the eyes and ears, and a thumb-straining challenge you won’t soon forget.”

“While Syd of Valis seems to aim at younger players, it's not a walk in the park.  Some of the big bosses are really challenging.”

“Filled with cinematic displays, lots of action, and new techniques like the slide move and an adventure backed by 8Mb of action means that Valis III is a top-notch game.”