POMONA, CA - November 16, 2021 -- Retro-Bit® Publishing, a publishing imprint of Retro-Bit® that is distributed exclusively by Innex Inc®, announced today that the pre-order window has officially opened for Gaiares, the Genesis/Mega Drive reproduction of one of the most critically-acclaimed shoot 'em ups to come out of the 16-bit generation. Pre-orders will be available from November 16 through December 19, 2021, at $54.99.

First published in 1990 by Renovation Game, Gaiares was praised for its massive boss designs, emotional story elements, and for its unique gameplay mechanic that allowed players to copy powers and weapons from enemies. Critics were quick to rave about the fast-paced action, with Mega Play calling it the "ultimate shooter." Three decades after first hitting store shelves, Gaiares remains the best-reviewed 16-bit shoot 'em up at both Electronic Gaming Monthly and GamePro magazines.

This upcoming release from Retro-Bit® Publishing will feature an embellished slipcover, reversible cartridge sleeve, full-colored instruction manual, a translucent Tektite cartridge, and certificate of authentication.  The limited-edition package will also feature an exclusive interview with James (Jamie) Bunker, who became the face of Gaiares in the early 1990s, thanks to a series of memorable magazine advertisements. In an enlightening conversation, the one-time spokesperson reflects on becoming a professional gamer as a teenager and his reaction to appearing in the advertising, as well as his exceptional hair choices.

When the game was released in 1991, a series of ads featuring James Bunker offered an exclusive Gaiares t-shirt with a purchase of the game.  Retro-Bit reached out to James Bunker to reprise his role 30 years later offering the same free commemorative Gaiares shirt when you pre-order the game. 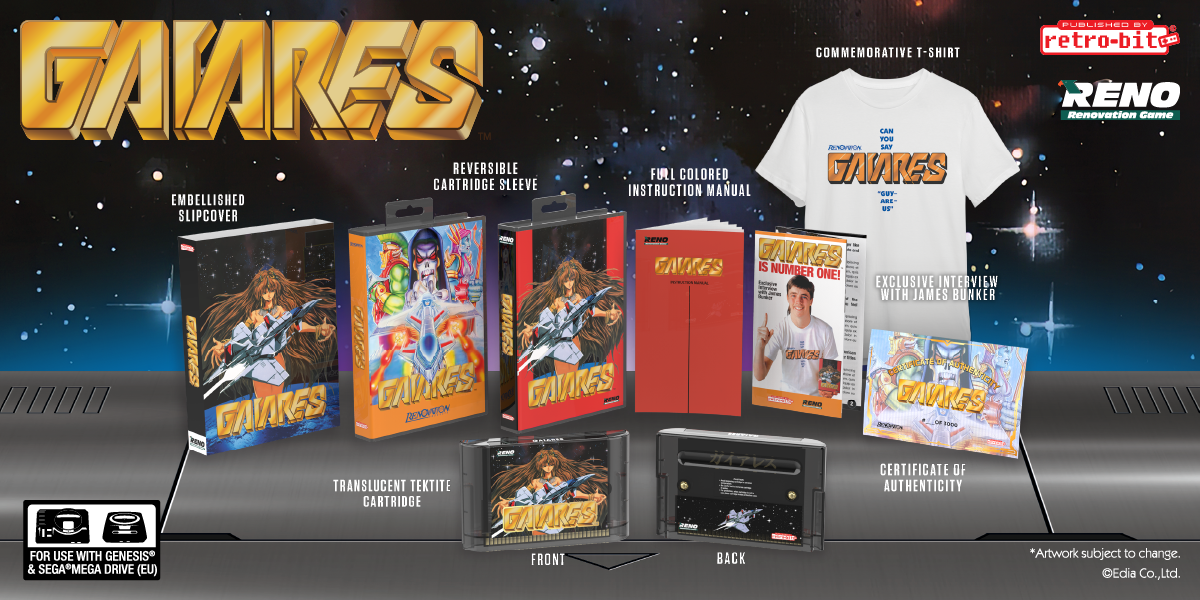 "Gaiares was the one 1990s action game that all other shoot 'em ups were compared to," explains Richard Igros, Marketing Director at Innex Inc. "We're so excited to not only shine a light on one of the best Genesis games of all time, but also to be working with the original spokesman, James Bunker, to once again spread the word about this must-own shooter."

A portion of the proceeds generated by Retro-Bit's Gaiares re-release will be donated to the Video Game History Foundation, a non-profit organization dedicated to preserving, celebrating, and teaching the history of video games.

Gaiares will be the latest release from Retro-Bit® Publishing, which most recently shipped collector's editions of classic games Undercover Cops and Mega Man: The Wily Wars, as well as the indie hit Alwa's Awakening.

More information can be found at https://retro-bit.com/gaiares/.

Since 2007, Retro-Bit® has been a pioneer of the retro-gaming community.  One of its counterparts, Retro-Bit® Publishing has brought gamers the physical form of many rare and exclusive titles in the retro-gaming industry.  In order to provide this new way to play, Retro-Bit Publishing has re-created rare games into physical media and brought them to where they were never released.  Retro-Bit Publishing gives gamers and collectors across the globe the opportunity to experience an alternative way to play, and own one-of-a-kind and limited-edition exclusives that include many extra collectible items.Retro-Bit can be found online at retro-bit.com, Facebook (@Retrobitgaming) and Twitter (@RetroBitGaming).

Innex Inc was founded in 2004 on the principles of innovation, fun, and a commitment to customer service.  Over a decade later and they continue to offer the Innex Experience of offering customers a wide variety of video-game-related toys and peripherals at a competitive price.  Innex is an exclusive distributor of world-renowned brands such as Retro-Bit®, Stubbins®, KMD®, and Level Up Labs® Pixel Frames.

All other mentioned trademarks are either trademarks or registered trademarks of their respective owners. This product is not endorsed, manufactured, produced, sponsored or licensed by Nintendo of America, Inc., USB Implementers Forum, Inc., Capcom Co. LTD, Irem Software Engineering, Inc. or any of their worldwide affiliates.

Due to a policy of continuous product improvement, Retro-Bit reserves the right to change specifications and content without notice.